The COVID-19 outbreak prompted the 441st session of the Maryland General Assembly to adjourn sine die on March 18, 2020. This is the first time the Maryland General Assembly has adjourned early since the Civil War. The legislature worked round the clock until the March 18th adjournment on "must pass" bills including emergency COVID-19 legislation; the operating, capital and school construction budgets; and two of Senator Carozza's priority bills, including the special events exhibition driving prohibitions bill. Senator Carozza also voted against the Kirwan education mandated funding bill, multiple tax increases, and legislation limiting the Governor's authority over the State budget.

CAROZZA FOCUSES ON RESPONDING TO CONSTITUENTS DURING COVID-19 PANDEMIC

Governor Larry Hogan and the Presiding Officers of the Maryland General Assembly announced major actions to prevent the spread of COVID-19 in Maryland, including early adjournment.

Other actions include the prohibition of gatherings of more than 10 people; the closure of Maryland schools, senior centers, restaurants, malls, and non-essential businesses; and mandatory telework for non-essential State employees.

“My top priority is to provide quality and responsive constituent service to those most impacted by COVID-19,” Senator Carozza said. “Under the orders of Governor Larry Hogan and the Presiding Officers of the Maryland General Assembly, the majority of State employees, including my staff, will be teleworking in an effort to help flatten the curve and slow down the spread of COVID-19. I, along with my Annapolis and District staff, are happy to assist you throughout this national emergency.”

A list of businesses exempt from the new Executive Order can be found here: https://governor.maryland.gov/wp-content/uploads/2020/03/OLC-Interpretive-Guidance-COVID19-04.pdf

The Maryland Department of Commerce announced the Maryland COVID-19 Emergency Relief Fund Programs for Businesses. Funding from these programs can go towards operating expenses such as payroll, rent, and other mission critical cash operating costs.

The Maryland Department of Labor announced the COVID-19 Layoff Aversion Fund. Funding from this program is designed to support businesses undergoing economic stresses due to the pandemic by preventing or minimizing the duration of unemployment resulting from layoffs. http://www.labor.maryland.gov/employment/covidlafund.shtml

The Maryland General Assembly unanimously moved legislation in response to the COVID-19 outbreak during the final days of session. This includes Senate Bill 1079—State Budget - Revenue Stabilization Account Transfers – Coronavirus which allows Governor Hogan to transfer up to $50 million from the Rainy Day Fund to fund costs associated with COVID-19. The Senate also passed Senate Bill 1080—State Government - State of Emergency and Catastrophic Health Emergency - Authority of Governor (COVID-19 Public Health Emergency Protection Act of 2020) which authorizes Governor Hogan to expand health care access and protections regarding the COVID-19 outbreak. Both of these bills are already in effect.

Shore items in the Fiscal Year 2021 Capital Budget include bond requests Senator Carozza submitted: $100,000 for the Wicomico County Bookmobile; $75,000 for the Pocomoke City Elks Lodge No. 1624; and $50,000 for the Believe In Tomorrow House at the Beach in Ocean City.

“I joined with my colleagues Delegate Wayne Hartman, Delegate Carl Anderton, and Delegate Charles Otto in introducing these Legislative Bond Initiatives,” Senator Carozza said. “While the budget is tight this year, all of these priority projects have a local match.”

“During this national emergency, we have been pushing hard to ensure the ‘must do’ bills are finished before this early adjournment, with the special events exhibition driving prohibitions bill as our top local emergency public safety bill” said Senator Mary Beth Carozza, who worked with Delegate Wayne Hartman as the House sponsor. “I am grateful that we all worked together to push it over the line - it’s a real public safety win for our local residents, visitors, business operators and law enforcement.”

“It was a total team effort to get this priority public safety bill across the finish line, and I look forward to this bill becoming law,” Senator Carozza added.

On Monday, March 16, the Senate of Maryland voted to pass House Bill 1300—Blueprint for Maryland's Future – Implementation. This bill would implement the education policies of the Commission on Innovation and Excellence in Education (Kirwan Commission). Senator Carozza voted against House Bill 1300.

“While I support the overall Kirwan education policy recommendations, I could not vote for the Kirwan bill as it simply is unaffordable and does not take into account the significant State and Local fiscal impacts,” said Carozza. “After three years of working on major education reform, there is little in the Kirwan legislation that addresses the challenges of disruptive students nor any serious reforms to improve the student learning environment or classroom and school management for our teachers and school leadership,” said Senator Carozza.

On the night before adjournment, the Senate of Maryland voted to pass House Bill 932—21st–Century Economy Fairness Act which establishes a tax on digital services and House Bill 732 Taxation – Tobacco Tax, Sales and Use Tax, and Digital Advertising Gross Revenues Tax which increases taxes on tobacco products and electronic smoking devices. Senator Carozza voted against House Bill 932 and House Bill 732.

“I have been receiving text messages and emails from Chamber of Commerce members and job creators pleading with the legislature NOT to raise taxes, especially during this national public health crisis where we’re facing a future of economic uncertainty,” said Senator Mary Beth Carozza.

“Our members along with everyone else in the state and country are very worried right now about their families and their businesses. They can’t focus on Kirwan right now. It is completely unfair to push through tax hikes that would vastly impact our industry’s future without allowing for proper input from citizens.

“With the restaurants, casinos, movie theaters and gyms closing, people are losing jobs right now – how can they possibly handle any tax increases? I can’t believe they’re even considering this right now. This is an absolute crisis.”

On the final day of session the Maryland General Assembly passed Senate Bill 1028—Balancing the State Budget. This bill would take budgetary powers away from the Governor and put it in the hands of the General Assembly through a referendum. Senator Carozza voted against Senate Bill 1028 and criticized the process in which the bill was advanced, noting that the bill advanced in the House of Delegates without a Committee hearing.

“It was wrong to advance such a major piece of legislation without a proper Committee hearing and when the Maryland General Assembly was closed to the public,” said Senator Carozza. “It also is concerning that Delegate Geraldine Valentino-Smith, the lone Democrat who voted against this bill, lost her leadership position as a result of speaking out against this unfair and closed process.” 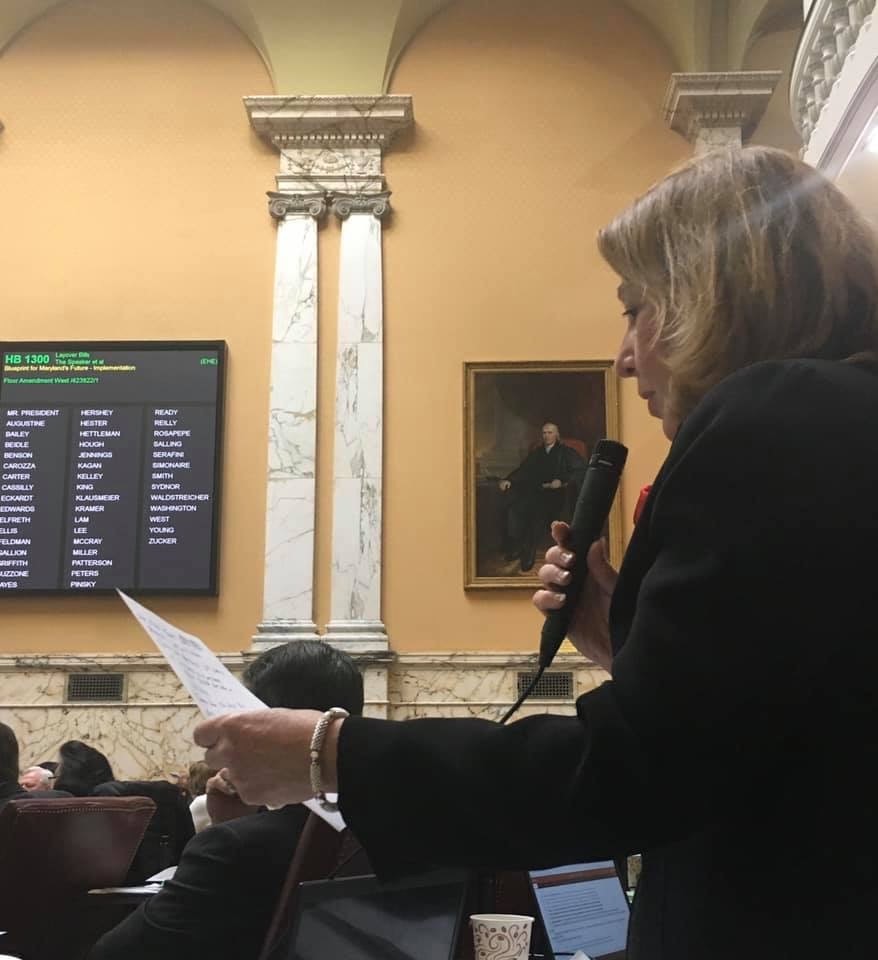 Senator Carozza speaking out against tax increases on the Senate floor and making note of concerns constituents have shared with her. 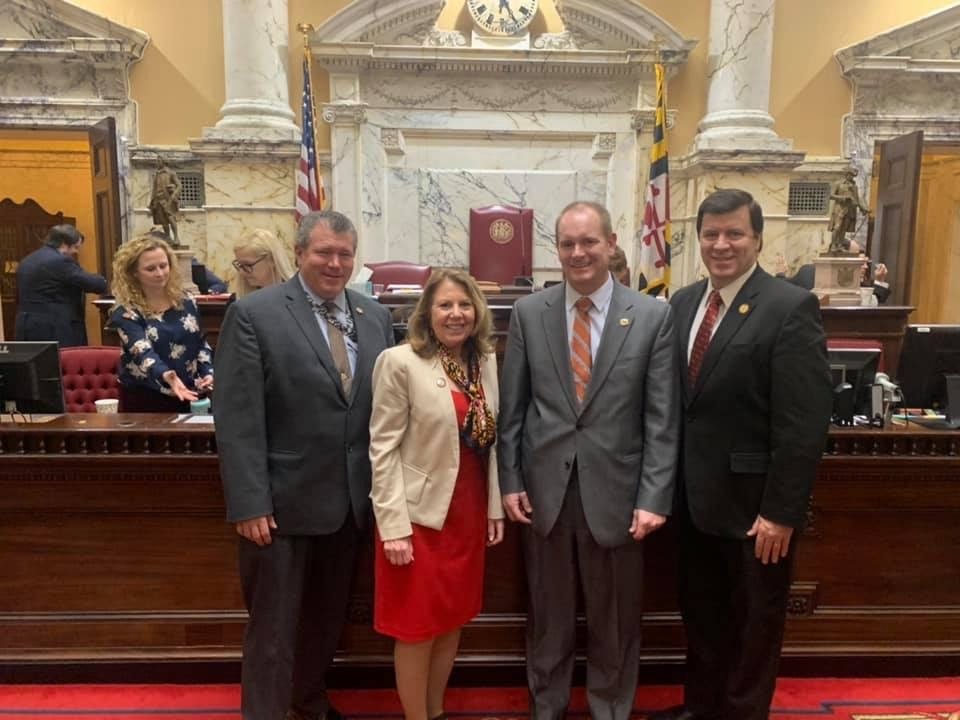