The halfway point of the 441st session of the Maryland General Assembly has come and gone, and the race is on to move legislation to the Senate Floor before Crossover Day on March 16. A majority of the action took place in the six standing Senate committees. Senator Mary Beth Carozza introduced constituents at the Senate Executive Nominations Committee; stood up for commercial watermen in the Senate Education, Health, and Environmental Affairs Committee; testified in support of legislation to protect children in custody proceedings in the Senate Judicial Proceedings Committee; and also presented legislation to increase access to life-saving medication in the Senate Finance Committee.

The Senate Finance Committee held a hearing on Senator Carozza’s Senate Bill 477—Public Health - Emergency Use Auto-Injectable Epinephrine Program – Revisions on Friday, February 28. Senate Bill 477 would provide restaurants who wish to participate the option to obtain, store, and administer auto-injectable epinephrine. Participants would be required to be trained and certified by the Maryland Department of Health and a certificate holder may administer auto-injectable epinephrine to an individual who is experiencing or is believed in good faith to be experiencing anaphylaxis.

“I became aware of the need for this legislation after the tragic death of Chris Trimper, a beloved community and business leader, who died suddenly this past October of anaphylaxis related to a shellfish allergy,” Senator Carozza said in her testimony in strong support of Senate Bill 477. “Shortly after Chris’s death, several civic leaders and business owners brought to my attention their strong interest and support of allowing restaurants to have the option of obtaining and storing epinephrine on their premises to be used in emergency situations.”

Senate Bill 477 has the support of the Allergy and Asthma Foundation of America, the Ocean City Hotel-Motel Restaurant Association and Greater Ocean City Chamber of Commerce, and Marylanders who have food allergies. Senate Bill 477 will be voted on in the Senate Finance Committee in the upcoming weeks.

“Senate Bill 665 simply requires a court, in any action in which child support, custody, or visitation is at issue, to provide information to the parties regarding the role, availability, and cost of a custody evaluator,” Senator Carozza said in her testimony in strong support of Senate Bill 665. A custody evaluator is a health professional tasked with evaluating the well-being of a child and their interactions with both parents in custody hearings.

Senator Carozza was appointed as a member of the Workgroup to Study Child Custody Court Proceedings Involving Child Abuse or Domestic Violence Allegations in 2019, chaired by Maryland Secretary of State John Wobensmith.

“During our Workgroup meetings, participants shared examples where parents and other parties were simply unaware of the role of the custody evaluator and commented that it would have been helpful to know about this option on the front end of the process,” added Carozza, noting that there currently is no requirement for the court to notify parties of the existence of custody evaluators.

Senate Bill 665 will be voted on in the Senate Judicial Proceedings Committee in the upcoming weeks.

The Senate Education, Health, and Environmental Affairs Committee held a hearing on legislation that would severely impact commercial watermen. Senate Bill 948—Natural Resources - Commercial Oyster Authorizations – Requirements severely limits the number of tidal fish license (TFL) holders that are authorized to harvest oysters, while retiring unused licenses. Dozens of commercial watermen from District 38 shared their views about this bill with Senator Carozza, and she used their personal stories to make the case for this hurtful bill to be withdrawn.

“Our commercial watermen are already taking it on the chin with so many of our waters off limits due to the sanctuaries and the number of days of fishing reduced,” Senator Carozza said. “I oppose Senate Bill 948 and have called on this disastrous bill to be withdrawn, and let the new Oyster Advisory Commission do its job. Senate Bill 948 and these other bills affecting our watermen destroy the trust and livelihood of our commercial watermen and their families, and I will continue to do all I can to work to defeat these ill-conceived bills.”

As a State Senator, Carozza has the opportunity introduce constituents who go before the Senate Executive Nominations Committee. This committee examines all nominations for appointments made by the Governor that require Senate confirmation and reports recommendations to the full Senate. This week Senator Carozza introduced constituent Megan Dingus, CRNP, who was confirmed to the Natalie M. LaPrade Medical Cannabis Commission and Charles R. “Chip” Dashiell, Jr., who was confirmed to the Maryland State Board of Education. Both confirmation votes took place on Friday, February 28.

Senator Mary Beth Carozza and her colleagues in the Senate and House of Delegates participated in an education strategy meeting with Governor Larry Hogan.

Senator Mary Beth Carozza, joined by Senator Kathy Klausmeier, testified in strong support of her bipartisan legislation to allow restaurants on a voluntary basis the option to carry and administer epinephrine to someone experiencing anaphylaxis. 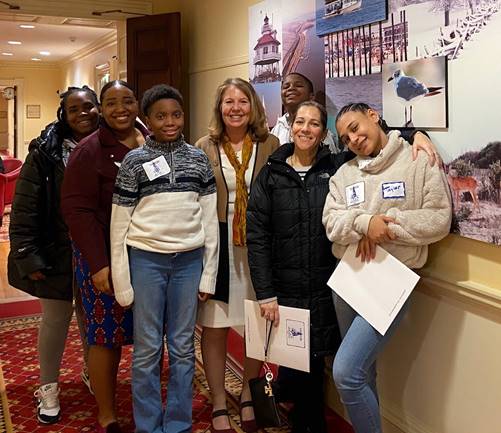