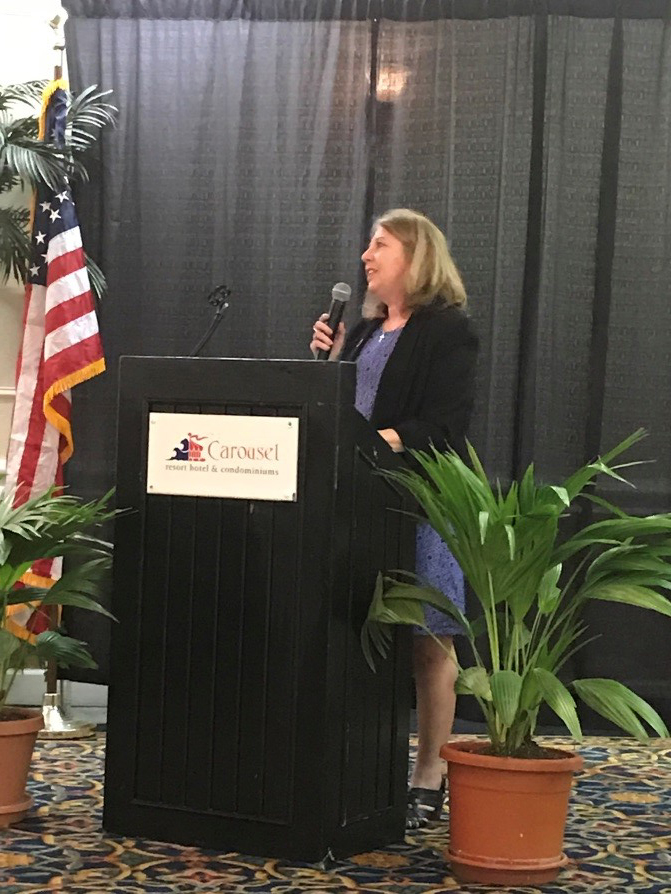 Carozza thanked the assembled business leaders for prioritizing issues to focus the statewide battle for funding.

“You all are playing a big role in prioritizing so we can have these big wins for the shore,” she said. “We’re not going to get everything on our wish list.”

Among the session budgetary highlights Carozza mentioned were: $52.9 million for the Chesapeake and Atlantic Coastal Bays Trust Fund, $15 million in the Department of Natural Resources waterway improvement fund, $1.3 million for renovations at Atlantic General Hospital and $13.1a million for the Office of Tourism Development and Maryland Tourism Board.

“We’ve been trying to make sure the highway user funds are returned to the counties and municipalities,” she said.

To that end, included in Maryland’s fiscal year 2109 budget are $57.7 million for counties and $29.9 million for municipalities, Carozza said.

“We still have a way to go to return those highway user funds … that were raided over the past eight years,” she said.

Despite the 2018 session opening with an instant override of Hogan’s earlier veto of mandated paid sick leave legislation, and the subsequent defeat of proposed countermeasures, Carozza said the House leadership has indicated the potential for future revisions exists.

“They left the door open for you as employers to provide as much information on how this bill ends up impacting you this season,” she said.

Navigating to the inlet discussion, Carozza said she continues to try to unite federal, state and local partners.

“We need to make sure everybody has some skin in the game,” she said.

While the Army Corp of Engineers has continued its commitment to dredge in the immediate future, Carozza expressed frustration the required feasibility study could be a multi-year process.

“I don’t just like to hear the word study.  I want to know what the long-term solutions are,” she said.

Shifting to wind turbine concerns, Carozza said she is still seeking a win-win scenario, and has fears outside the viewscape realm.

“There are concerns from the coastal fishing industry about the possible negative impact [and] the true cost of this project for both rate payers and taxpayers,” she said.

Turning to funding concerns for the convention center expansion, Carozza said she sent a formal letter to Hogan and hopes to consult with his staff to examine creative financing options.

“We can’t lose a year on that because of how important the convention center is to not only for our local economy, but how much money it brings into the state,” she said.

In terms of negotiating, Carozza said altering the focus from a shore priority to the larger state benefit has proven to be an effective legislative approach.

“That’s the case that I make in appropriations on the House floor when I get up and advocate for the priorities of Ocean City,” she said. “Tie it to not just local … but make the case for the whole state.”