After the 441st Session of the Maryland General Assembly adjourned on March 18, 2020, Senator Mary Beth Carozza (District 38) has remained focused on assisting her constituents most impacted by the COVID-19 outbreak. Senator Carozza also supported the approved Board of Public Works projects in District 38 and has been recognized for her strong advocacy in support of Maryland’s municipalities during the 2020 legislative session.

Since adjourning, Senator Mary Beth Carozza has focused on providing quality and responsive constituent services to those most impacted by COVID-19.

“My top priority remains providing quality and responsive constituent service to those most impacted by the COVID-19 national emergency,” Senator Carozza said.

“I was encouraged when Governor Larry Hogan announced that plans are underway for a gradual rollout of the State’s recovery phase. We all are looking forward to the phased-in opening of Maryland businesses with health, safety, sanitary, and social distancing protocols in place.”

“As new recovery and targeted reopening policies are announced in the future, we need to ensure that our small businesses are among the partners as these decisions are made. Our small business operators have been so hard hit in the fight against COVID-19, and a safe health and economic recovery is so critical to the livelihood of so many of our small family businesses and self-employed operators. I want to thank those who are offering solid recommendations on Maryland’s health and economic recovery, especially the members of the Maryland business coalition which have shared their recommendations with the Governor and leaders of the Maryland General Assembly.”

Senator Carozza supported the five District 38 projects that were approved by the Board of Public Works at its April 22, 2020 Zoom meeting. The Board of Public Works is composed of Governor Larry Hogan, Comptroller Peter Franchot, and Treasurer Nancy Kopp, who are responsible for ensuring that significant state expenditures are carried out in a lawful, fiscally-responsible way. Lieutenant Governor Boyd Rutherford, who has taken over the day-to-day operations for the State of Maryland so Governor Hogan can focus on combatting the COVID-19 pandemic, has been filling in for the Governor on the Board.

The District 38 items on the agenda include two grants totaling $173,126.83 and $217,130.03 from the Rural Legacy Funds to the Lower Shore Land Trust, Inc. to acquire two conservation easements in the Dividing Creek Rural Legacy Area in Somerset and Worcester Counties; a $120,000 request from the Maryland Department of the Environment for the Mt. Hermon Road Sewer Extension project in Salisbury; a $44,000 grant from the Maryland Historical Trust for the Fruitland Community Center, Inc.; and a request from the Maryland Stadium Authority to approve a Guaranteed Maximum Price contract for Phase III of the Ocean City Convention Center renovation and expansion project.

CAROZZA RECOGNIZED AS A MUNICIPAL ‘SUPER STAR’ BY ADVOCACY GROUP

The Maryland Municipal League (MML) presented Senator Mary Beth Carozza with its Municipal Super Star Award. Carozza is one of eight lawmakers to receive this award for going above and beyond on behalf of municipal government during the 441st session of the Maryland General Assembly. Delegate Carl Anderton (District 38B) and former Mayor of Delmar also received this prestigious MML award.

“I’m humbled and honored to be among the lawmakers named as a municipal super star,” Senator Carozza said. “Throughout my time in public service, I have prioritized working with local mayors and town council members on shared priorities to advance our Shore way of life.”

“We are honored to present Senator Mary Beth Carozza with our Municipal Super Star Award,” said Scott A. Hancock, executive director of the Maryland Municipal League. “The Senator demonstrated exceptional commitment to Maryland’s municipalities, and we cannot thank her enough for her contributions. Our cities, towns and State are better because of their partnership.” 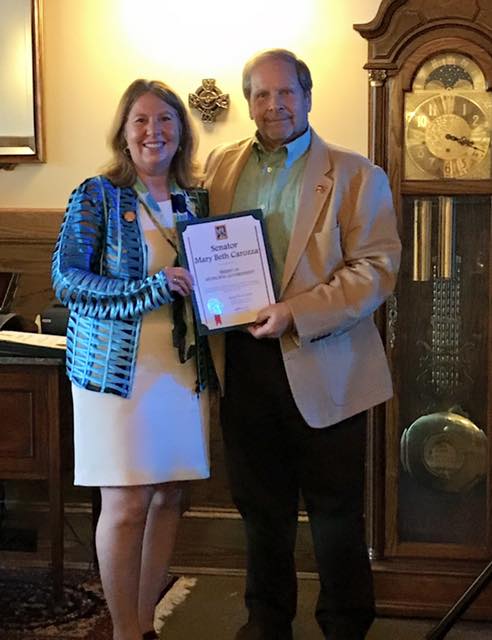 Senator Carozza was named a recipient of Maryland Municipal League’s Municipal Super Star Award. This photo was taken in April 2019 when Senator Carozza received the MML Friend of Municipal Government Award. All 2020 awards will be presented to the recipients at a later and safer time.